Bobby Clark followed up his first-team debut with a goal for the under-21s in what was a weekend of mixed results for Liverpool’s academy.

While Jurgen Klopp’s senior team took on Everton on Saturday, both Barry Lewtas and Marc Bridge-Wilkinson had their respective encounters with Man United and Tottenham on their minds.

For the under-21s, it was Man United who made the trip to Kirkby on Saturday, with Lewtas naming a team that will have a number of names familiar to fans.

Isaac Mabaya, Luke Chambers, Jake Cain, Clark, Harvey Blair and Melkamu Frauendorf were named in the XI, and it was off to a good start with the young Reds dotting United’s goal.

It was Cain who found the breakthrough, just days after what would have been a disappointing end to the transfer window having failed to secure another loan spell, with a deflected 1-0 finish. 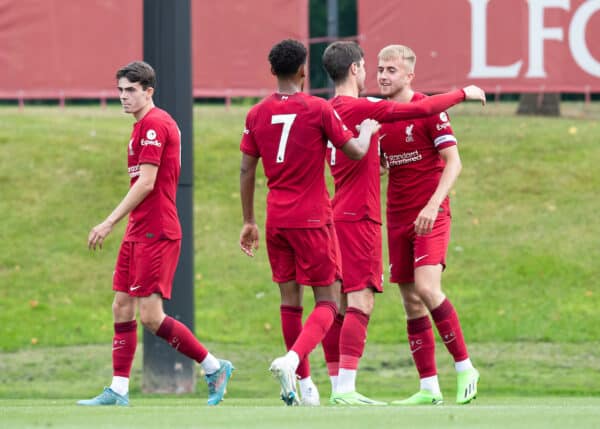 The scoreboard quickly turned upside down with two goals in seven second-half minutes for the visitors, leaving just over 30 minutes for the young Reds to get back into the game.

They only needed three though, as Clark won a penalty before converting the rebound after Layton Stewart’s penalty was saved to make it 2-2, a goal and an assist for the 17-year-old. .

The Under-21s, in the end, had to settle for a draw against United despite their best late effort, earning their sixth point of the season in game five. 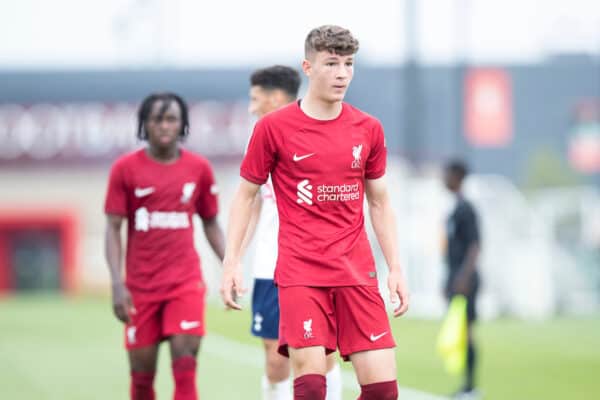 The result was not so positive for the under-18s, with Tottenham handing out a 3-1 defeat in the Premier League Cup tie at Kirkby.

A hat-trick by Spurs’ Jaden Williams was completed in 55 minutes, with Lewis Koumas continuing his form in front of goal with a late consolation, his fifth goal of the season so far.

Summer signing Trent Kone-Doherty played the full 90 minutes for the young Reds, but Ben Doak was missing, with Liverpool academy correspondent Andy Kelly simply saying he was “out”.

That’s two wins and two losses to start the season for the under-18s, many of whom will be hoping for a chance to compete in the UEFA Youth League against Napoli on Wednesday.

The match precedes the opening match of the first team Champions League in Italy, kicking off at 1pm (BST).